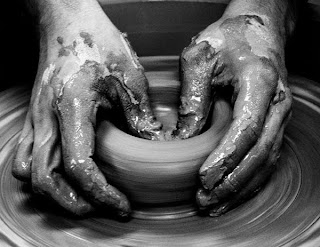 So - I preached on Sunday...but I preached to myself all week leading up to it. I struggled, really struggled... not sure how vunerable I'm ready to be in the blogoshere.... but I'll say now- that I need to remember to stay on the wheel.

This is a powerful and hard word from the prophet Jeremiah. He speaks boldly, harshly and it can be hard to hear his words about God’s justice…

Imagine if we could not only hear but also see….. to go and walk with Jeremiah down to the potters house…
– we can see the potter working tirelessly at the wheel
– the wheel is spinning
– the potter’s hands in the wet and muck of clay
– –we see the clay spoil in his hands,
– But The potter keeps it on the wheel
– His hands wrap around, pressing, pushing, moving, holding, guiding, molding…
– We see the potter rework the clay into another vessel
o working and reworking it, until it seems good to him
– He will make a good vessel out of this
– The potter has it- in his hands- and it will turn out just as he has planned…

Can you see the potter at work?
Can you see yourself?
On the wheel—spinning- drenched, muddy- but held by the master’s hands?

The Lord says to Jeremiah speaking of the nation of Israel, “Can I not do with you, O house of Israel just as this potter has done? Just like the clay in the potter’s hand, so you are in my hand.”


Pottery in Jeremiah’s day wasn’t just for beauty- pottery was not art for arts sake, although it may be beautiful it was for a use.
It was not just lovely to see- - it was made for a purpose.
It was to be
used,
filled,
carried,
poured out,
and filled up again

people would be fed from it,
thirst would be quenched with it,
things may be planted and grow in it

We hear in this word from Jeremiah that God is not done with us yet—if he was – he wouldn’t continue to rework the clay- he’d give up on it- toss in the fire- but NO he keeps working it.

This is good news –this is a word of hope…

It is ….as long as we are interested in becoming what God is creating us to be.

But its hard work to become what God wants us to be.

God has plans for them- he intends good.

And yet- these lumps of clay are still responsible for their own destiny.

Their choice toward repentance or further desertion and discard of God’s will can change the plans—the hope God intends.


I think about the story of Jonah- how Jonah is sent to Nineveh to cry out against them because of their wickedness.

He doesn’t want to go—he attempts to flee, but God is working in his life,
shaping circumstances,
attempting to lead him there.
Jonah finally relents and yields to God’s call. He goes and shares God’s judgment with the people of Nineveh.
He is sure they will continue in their ways- but something amazing happens!
The people all believe, repent, everyone -even the king repent, fast, and put on a sackcloth. They all surrender to God’s will.

Chapter 3 verse 10 of Jonah says, “When God saw what they did, how they turned from their wrong ways, God changed his mind about the calamity that he had said he would bring upon them; and he did not do it.”


We know God’s mind- his hope, his desire, for us is good.


In fact God declares “For surely I know the plans I have for you…plans for your welfare and not for harm, to give you a future with hope.”(Jeremiah 29:11).

God’s mind did not so much change, as the people did. They chose what was right. They listened and learned.
They obeyed, they turned, repented, and were to be shaped into the people God was calling them to be.


God’s hands are always guiding us- guiding the vessel he created to be created into the purpose he has.
Ephesians 2:10 says, “ For we are God’s masterpiece. He has created us anew in Christ Jesus, so we can do the good things he planned for us long ago” (NLT)
A masterpiece takes time to be created, to be turned, reworked.


The passage in Jeremiah reveals that divine justice does not exclude the possibility of human repentance. Rather it demands and expects it!

A full humble human response to God’s will can and will open up a wholly changed prospect for the future. (Interpretation, 113)
Our future is not in stone- it is not yet hardened and it is not yet thrown out.
There is hope.

Doing what is evil in God’s sight—as verse 10 defines is “not listening to Gods voice.”

Just before God leads Jeremiah to the potter’s house he had instructed Jeremiah to “stand in the People’s Gate” and exhort the people to honor the Sabbath by not bearing a burden on the Sabbath day—And what did the people do? “… they did not listen or incline their ear; they stiffened their necks and would not hear or receive instruction.”
They became hardened.
They were no longer pliable, able to be molded and shaped.

If they had chosen to honor the Sabbath – they would have taken the time to let their burdens down, to stop, to listen,
to know God’s will, to be held by God, and be guided….
The imperfections would have needed to be let go, they would have had to turn and turn – repent means to turn from what is wrong- They would need to turn on God’s wheel, to be moved and molded by His hands--but NO—they were too busy- they brushed by Jeremiah as he stood at the gate- they didn’t have time.
They rushed by God forsaking his call, his concern, his commandments,
his ways and his will-
-- they jumped off the wheel…. they didn’t want to hear it- they wanted a quicker fix.


I think about what would have been if they had stopped—
- if they like the clay had stayed on the wheel and been held and molded, and pushed, and worked over---
it would hurt—
it would be demanding, bits of clay get smoothed over and fall away
-some parts would need to be let go
—the things that they needed to deal with
–all that needed letting go, changing, reforming, transforming the sins, addictions, grief’s, fears, wrong ways—they would have been
lifted from the vessel
--worked out, by the Potter’s hands.

They jumped off the wheel
- they could do it better
- they wanted to spin faster
or harden now
- they could create their own purpose – didn’t need the Potter’s hands.


Sometimes being on the wheel of our lives feels like too much to handle.
Either life isn’t moving at the pace we want or it feels too fast…
we don’t allow God time to work
– we want to be done.


Do you ever notice that we’re striving for what’s next?
We’ve made plans, created goals, benchmarks, milestones to accomplish and we think we’ve arrived…
only we get there and …then what?
We make lists and accomplish them and then what?
We strive to get there….
to some pinnacle of achievement only to find that
we really haven’t submitted
our lives to God’s hands.
We haven’t surrendered it all to God’s will.

Somewhere in the midst of this life of ours- our plans took over.
Somewhere the wheel filled with the demands of the world—spinning
—and we no longer trusted
that God would--- could, work.

Somewhere we took over…

We believed but did we live?

So much of our faith has
“become about a statement of belief,
but scripture doesn’t call us
to make believers, but disciples.”
Our belief has to come to life.

We must live it,
practice,
and follow God’s will.

Over and over people
—not just Jeremiah’s crowd
--all of us-- refuse to yield
—choosing self over God
- our will over God’s.


There are consequences for rejecting God’s will. There is judgment—there is justice.

Judgment is not anger, it is love, it is protection---it is hope—it is seeking to mold us and make us into the work God intends.

Judgment is the carrying out of God’s justice—it is about integrity, truth, and the fair treatment of all.

We refuse, harden against, forsake, rebel against God’s will and there is consequence. Consequence caused by our choice. It is the same for all -God doesn’t pick and choose.

When we here verse 11 and hear God say,
“I am a potter shaping evil against you and devising a plan against you”
it can sound like God is all about judging – coming after us—
But God’s judgment isn’t about
plotting against us.
God is not a master who has us as puppet on strings.
God isn’t against us.

God has his hands on us,
in us,
through us,
holding us
—shaping us—
God is willing to get dirty,
to bend over us working and working and working
God is in this
God has created us
God wants this vessel--- this disciple
to come out right-
God has no timeline- there is no moment
if/ when the vessel starts to spoil that
He’ll give up

Every good and wonderful thing
that is here- all these things that this stole tells the story of- all these moments of clay that have shaped my life
- I didn’t plan any of them
- —they were God’s hands on my life. He had a plan. He still does.
- I have to listen – to hear it
- and let Him mold me and live it!


No matter all our attempts to jump off the wheel…
God out of merciful love,
out of a justice that loves and wants what is real and right
and true and good says,
“Stay – stay on the wheel,
turn and repent- listen
and let me shape you- turn and turn
– let my will work in you--- hear me while I hold you.

We may not like what we hear.
We have to deal with the wrongs in our lives,
with the hardness of our hearts,
but God will pour over us everlasting water,
We will be moveable clay,
He’ll keep his hands on us and we can be malleable—as his water falls on us,
He will perfect us at the right speed,
He will work us knowing what we can take, and we must turn and turn
from our hardness,
turn from our rebellion,
turn from our will and turn into his,
turn into his work
– into the masterpiece he seeks to create- turn more and more into his image
- his purpose- his plan.

The image you shared of the hands on the potter's wheel is beautiful. Where did it come from? I would like to use it in a prayerbook I'm putting together. If you know its origins, can you email me at rbarenblat at gmail dot com? Thank you!

(Also, your sermon is lovely, too!) 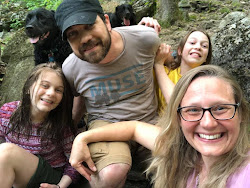